What are Arc Fault Circuit Interrupters For?

Arc faults breakers detect dangerous arcing condition that can start a fire.  This is a very technical subject, so here is a short introduction video.

Even better explained by IAEI News:

INTRODUCTION
Smoke alarms, fire extinguishers, emergency escape ladders these are all proven methods for making a quick and safe escape from a fire in the home. However, in addition to these measures, safety experts are looking at new technology in the walls to prevent fires from starting in the first place. Arc fault circuit interrupters (AFCIs) — the next generation in circuit breaker technology — are one such life-saving tool. Beginning in January 2008, the National Electrical Code® (NEC®) will expand its requirement for AFCIs. The technology has been required in bedrooms since 1999, but the latest edition of the NEC® will expand AFCI use even further to other areas of the home. Experts believe this new requirement will have a significant, positive impact on homeowner safety, and decrease the number of lives lost and injuries that occur in residential fires. Advanced AFCI technology was developed in response to an identified problem of home fires originating from electrical causes. According to the latest reports from the United States Fire Administration (USFA), electrical problems spark an estimated 67,800 residential fires every year. These fires are responsible for deaths of 485 innocent victims, approximately 2,300 injuries and more than $868 million in residential property damage.1 The United States Consumer Products Safety Commission (CPSC) estimates that AFCI technology could prevent more than 50 percent of electrical fires 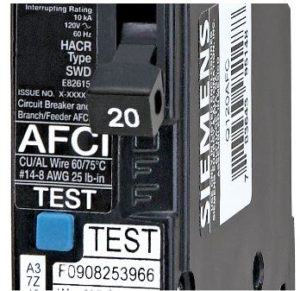 To Test: Push the test button, the breaker should flip. turn the breaker all the way off then back on. Any failures or other issues should be addressed by an electrician.

A NATIONALLY RECOGNIZED SAFETY DEVICE
AFCIs first appeared in the 1999 edition of the National Electrical Code (NEC®), which required their use in branch circuits that supply power to receptacle outlets in bedrooms of homes. After further analysis, the 2002 NEC® expanded its requirement for AFCIs to also include all bedroom circuits, including those that supply lighting fixtures, smoke alarms, and other equipment. The 2008 edition of the NEC, which will be published later this year, takes safety a step further by requiring that all new home construction install the technology on other circuits in the home. Several prominent organizations in the United States have come out in support of the AFCI expansion. In addition to the CPSC and the National Electrical Manufacturers Association (NEMA), the expanded requirements have the support of the U.S. Department of Housing and Urban Development (HUD) and the National Association of State Fire Marshals, as well as home inspectors and fire personnel, who see first hand the significant damage electrical fires cause.
Expanding Home Safety 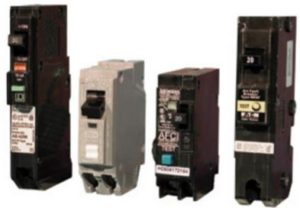 A TECHNOLOGICAL LEAP FORWARD
AFCI technology provides increased protection over a conventional circuit breaker by detecting a condition known as an “arc fault.” Underwriters Laboratories, Inc. (UL), an independent, product safety certification organization defines an arc fault as an unintentional arcing condition in a circuit. Unlike a conventional circuit breaker, which detects overloads and short circuits, an AFCI utilizes advanced electronic technology to “sense” different arcing conditions. Common household items, such as a motor-driven vacuum cleaner and the motor in a furnace, naturally create arcs when they are operating. Each of these conditions is considered a normal arc, which can also occur when a light switch is turned off. Arc faults, however, occur from damaged wiring, overheated or stressed electrical cords, worn electrical insulation, wires and/or cords in contact with vibrating metal, damaged electrical appliances and more. This potentially dangerous condition creates high-intensity heat which may exceed 10,000 degrees Fahrenheit resulting in burning particles that can easily ignite surrounding material, such as wood framing or insulation. AFCIs are designed to recognize when arc faults occur and automatically shut the circuit down before it becomes a fire hazard. Manufacturers of AFCIs test for the hundreds of possible operating conditions, and design each AFCI to constantly discern between normal and dangerous arcs. 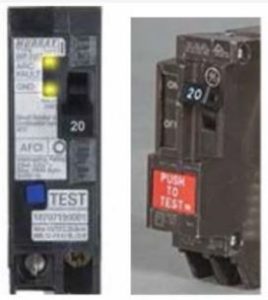 AFCI and GFCI breakers look similar but they are not the same thing.  AFCIs are primarily designed to prevent fires, GFCIs prevent electric shocks.

While AFCIs are visually similar to GFCIs (ground fault circuit interrupters), there is a major difference between the functioning of the AFCI as compared to a GFCI. While AFCIs and GFCIs both offer protection from electrical hazards in the home, each does so in different ways. The function of the GFCI is to protect people from the deadly effects of electric shock that could occur if, for example, parts of an electrical appliance or tool become energized due to a groundfault. The function of the AFCI is to protect the branch circuit wiring from dangerous arcing faults that could initiate an electrical fire. AFCIs do not replace GFCIs. The two technologies can co-exist with each other and are a great complement for the most complete protection that can be provided on an electrical circuit.
Expanding Home Safety 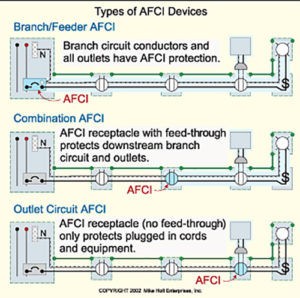 AFCIs are intended to mitigate the effects of arc faults by de-energizing the circuit when an arc fault is detected. In 1996, Underwriters Laboratories published UL 1699 the recognized national standard for AFCIs. UL 1699 covers a wide variety of conditions that may affect AFCI performance, including humidity, unwanted tripping, abnormal operation, voltage surges and more. Each type of AFCI is required to comply with UL 1699,. There are two types of AFCIs available branch/feeder and combination. Both types of AFCIs are intended to be installed at the origin of a branch circuit or feeder, such as a panel board. The branch/feeder AFCI provides for detection of arcing faults that can occur line-to-line, line-toneutral and line-to-ground. The combination AFCI provides added safety to the home’s electrical system by detecting not only parallel arcing, but also series arcing, which is useful in identifying lower level arcing in both branch circuits and power supply cords. The 2005 NEC revised its AFCI requirements to provide for this upgrade in technology. Effective January 1, 2008, combination AFCI protection will be required in all homes. As stated earlier, an AFCI can be used in conjunction with the GFCI to provide added protection to the home. A common way to provide both types of protection is to use an AFCI circuit breaker and a GFCI receptacle.

SMALL COST EQUALS BIG PAYOFF
As with any change in the required protection for the electrical system, there have been many discussion and deliberations both for and against arc fault protection being a part of the NEC. Some have argued that the cost of the AFCI is higher than a standard circuit breaker and, as such, it costs too much to provide the increased protection. While there is an additional cost to upgrading new homes from standard circuit breakers to AFCI technology, this cost increase is small. In fact, the CPSC reports the cost difference between a standard circuit breaker and an AFCI can be as low as $15 per unit.2 For example, if AFCIs were used on 12 electrical circuits in a new home, the cost increase would be approximately $180, based on converting those circuits from standard to AFCI circuit breakers. This means the cost increase would be approximately one tenth of one percent on the average $193,000 home. When you compare this cost to the billions of dollars of negative economic impact caused by electrical fires each year, $180 is a relatively insignificant price to pay.
Expanding Home Safety Additionally, the cost of adding AFCIs is much less than some “non-safety related” upgrades that are typical for a new home, such as expensive granite countertops and stainless steel appliances.

THE BOTTOM LINE
Applying technology to improve the electrical safety of the home is a wise investment for both the homeowner and the community at large. Reducing fires of electrical origin and saving lives is an important responsibility of the entire construction and regulatory community. The heavy toll on human life and property from electrical fires provides a clear indication of the need for home builders and contractors to provide consumers with the safest home possible. Educating home buyers on the latest in home protection devices beyond the smoke alarm, emergency ladders, and similar “after the fact” safety devices is the first step in preventing electrical fires. In addition, new home owners should know what options are available in the way of home safety, and are encouraged to ask their builder or electrician about the life-saving capabilities of AFCIs. With the potential to cut the number of electrical fires that occur each year in half, AFCI technology should not be overlooked.
Expanding Home Safety

We just got a nice note from Randy from our last class. “JJ and Suz,I was not sure how much information could be conveyed in a 12 day course. But you did it, and you Read more…

Tables of Building Material R-values The R-values for specific assemblies like doors and glazing in the table below are generalizations because they can vary significantly based on special materials that the manufacturer uses.  For instance, Read more…